The Luck Of Eden Hall, Victoria Moon :a track by track guide 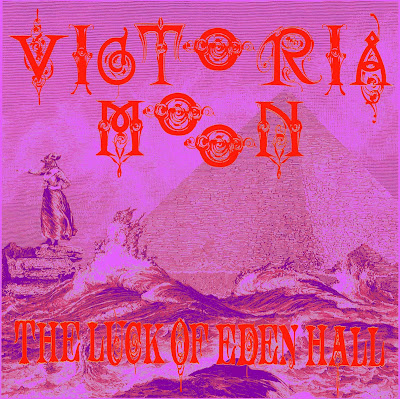 Victoria Moon, the latest album from the brilliant The Luck Of Eden Hall rises triumphantly into the music skies and finds the Chicago Psychpop masters continuing to be at the height of their abundant creative talents. Beautifully play, sung, written and produced it’s a wonderland of musical adventure in melody and sound that’s guaranteed to blow your mind, fill your ears with joy from start to finish and will effortlessly lodge itself in a lot of good folk's albums of the year lists.  The great thing about the Edens is they obviously love creating their masterful blend of great songs served up in a full ravishing spectrum soup of  kaleidoscopic detail and layers just as much as we love listening to it so each new release is going to be everything you could wish for and always a little bit more. But all you on the ball Luckheads out there don’t need me to tell you this since you’ll already have grabbed yourself either one of the, as ever, strictly limited edition, beautifully packaged physical copies or purchased just the music itself from their Bandcamp site. 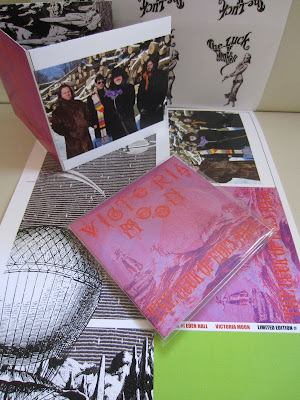 Ironically even though the actual CD’s have “instant collectors items that will be going for silly money on ebay by this time next year” stamped all over them, I very much doubt that any one wise enough to buy a copy of Victoria Moon will ever let it leave their collections, other than in their wills or as part of a badly contested divorce settlement. With half already pre-ordered the rest ain’t going to be around for long so I suggest you rush over there and catch this treasure while you can. Meantime you can get the complete lowdown on the band via my Bucketfull of Brains interview in the latest issue.  And here at Art Into dust we are proud to deliver up an exclusive track by track guide of this most glorious of releases with the Ringmasters of Eden Hall, Gregory Curvey and Mark Lofgren. So sit back, pour yourself a well deserved cup of tea and enjoy my friends. 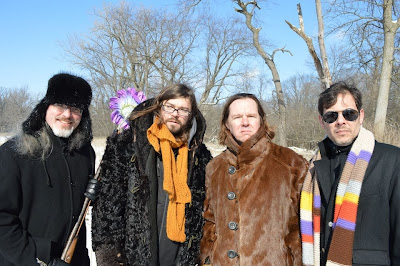 Sassafras Overcoat
Curvey:
I had wanted to do a photo shoot wearing my 100 year old coats for a couple of years, but couldn't get all of the pieces and players aligned while there was snow on the ground until last Winter. Mark and I decided to film a video at the same time and add some interest by hiring a couple burlesque girls to get naked in the snow. Our friend Lee Klawans agreed to photograph us and knew a couple girls, so to make a long story short, we shot a music video without knowing what song we were going to use, which inspired me to write Sassafras Overcoat. I play everything on that track except for Mark's fabulous bass part

Queen Of The Stars
Curvey:
This song was originally going to be included on Alligators Eat Gumdrops but our publicist suggested that I cut it, so I did. It's been reworked a little for Victoria Moon. I added guitar riffs throughout the song and a sequencer part during the bridge. The storyline was inspired one Summer day when my daughter was playing in her kiddie pool with a few colorful balls. I play everything on the track. 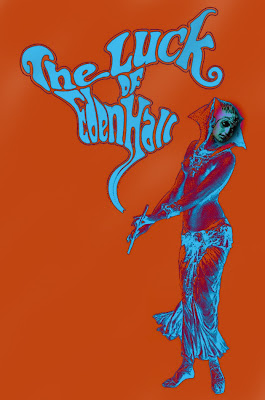 Victoria Moon
Curvey:
Another one left over from the Alligators Eat Gumdrops brood. It was originally titled Under Victoria. The lyrics weren't inspired by anything in particular, I was just trying to paint a picture. I think the true inspiration happened in the middle eight when I decided to scrap my guitar solo and play with some reel to reel tapes my Father-in-law gave me and then I over dubbed a track from an old album of Rumi poetry from my LP collection. It was a very happy accident. Carlos plays the drum kit, Mark plays bass and I cover the guitar parts and sing on this one.

The Collapse Of Suzy Star
Lofgren:
I read an article about how stars can collapse into black holes and how it all relates to theories about our universe expanding and collapsing. Understanding about half of it (in college I filled out my science credits with a cool class called "Bizarre Astronomy"), I wrote a song equating the rise and fall of a semi-famous actress to that of a Suzy Star (which, as far as I can gather, is a star collapsing into a black hole). I played bass, acoustic guitar, keyboard and sang, Greg played the rest. 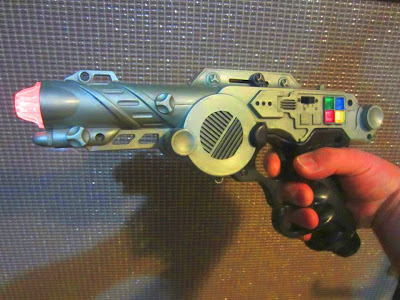 Zap
Curvey:
Zap was written years ago, right after my Par Crone solo project was released but never recorded. I changed the lyric a little for this version. The guitar riff was inspired by my Echoplex and the sounds in the middle eight freak out are created by a toy laser gun with great analog sounds that can be modulated. I used a Theremin that was built by Moog during the final chorus. Carlos plays drums, Mark plays bass and I play the rest.

Sitting Bull
Curvey:
One of my favorite childhood memories is of my Grandfather showing me his Native American arrowhead collection and I've always been fascinated by the sequence of European history and the American wild west. The industrial revolution and the demise of the Native American tribes. They were the last of the real human beings. Hunter gatherers. The verses are all inspired from lines in speeches given by Native American leaders. The ending includes Jim playing the Mellotron over a recording I made while riding on an old carrousel at a museum in Michigan this Summer. Mark plays bass, Jim plays Mellotron and I play everything else on the track.

Drunk Like Shakespeare On Love
Lofgren:
This one I had a little fun with, loosely based on running into an old friend who has lost his way in mid life. I'm trying to capture a crazy phase of life filled with drunken adventures, trips to London and to midnight palm readers, falling in love with someone you barely know…youth, fleeting youth!  I played bass and sang, Carlos played drums, Greg played guitar and keys. 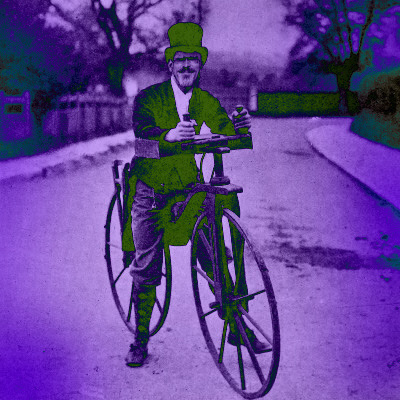 Dandy Horse
Curvey:
I was trying to find inspiration for the lyrics and came across an article on the old high wheeler bicycles. The great names they were given like Penny Farthing and French Bone Shaker did the trick. It took several takes to get the final vocal arrangement and I employed my Pro One sequencer during the grand finale. Jim plays Mellotron and I play everything else on this track.

Super Phantasmal Heroine
Curvey:
I had heard a story on NPR about how popular the drug heroin was becoming with suburban school kids because it was cheep and easy to get. It kind of blew my mind. I've always been straight edge myself and say to each his own, but I don't think its wise to mess with anything that's highly addictive and can kill you. Personally I think the only drug you should use that involves a needle is vinyl records. That's the track. Mark played bass and I play everything else on this one.

Cracked Alice
Curvey:
I was sitting in our family room where my daughter keeps a lot of her toys. We had set up a huge play city using all of her blocks and I was inspired to write the lyrics for this song. I like the Sir Real and his Avant Guard lines but I wouldn't be surprised if someone hasn't thought of that before. I have a great music video idea for this one that I hope we'll have time to accomplish. Mark plays bass and I cover the rest the instruments. 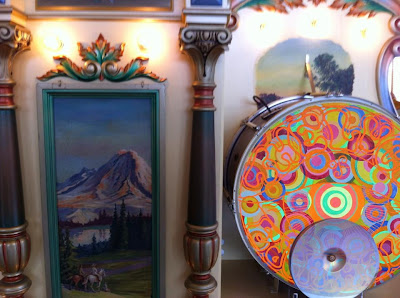 Blood On My Feet
Curvey:
One morning I went down into my studio, plugged in and this song came out. I was having difficulty coming up with a good story idea so I handed it off to Mark and he finished the lyrics. I used my Echoplex on the guitar and vocal tracks and you can hear it's classic regeneration sound in the right channel. Jim plays Mellotron, Mark plays bass and I cover the rest.

She's Your Anodyne
Lofgren:
I think an anodyne is an archaic opiate remedy used to sooth pain in the 19th century. It's a song about feeling anxious and depressed and trying to calm down in an complex and possibly insane world by reconnecting with friends and family. I played bass and sang. Carlos played drums and Greg played guitar and keys.

The Horrible Pill Book
Curvey:
This was the first song I wrote after we finished the Alligators Eat Gumdrops album. It's one of my wife's favorites along with Queen Of The Stars and I've put both tracks on the record for her. I like the lyrics which are kind of in an Evil Woman 70's witchy vein and I used a tape machine during the chorus to slow down my voice and make me sound different. I play everything on this track. 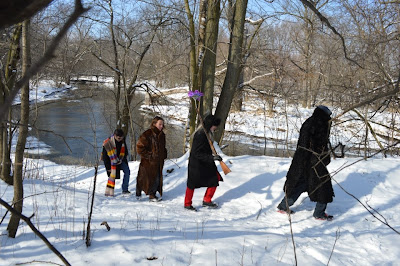 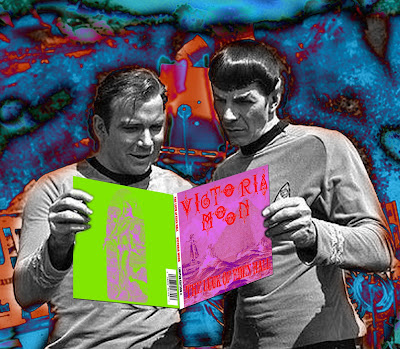 Kirk: There's no way this is going to be as great as my new album.
Spock: I am afraid that logic would dictate otherwise Captain.

Labels: The Luck Of Eden Hall Victoria Moon :a track by track guide