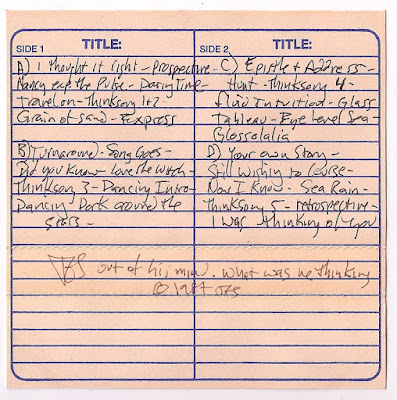 it is wonderful that such beauties can turn up from out of the blue and so kind of the great man to share it with us all, Thank you Jonathan

transferred from CASSETTE! (and then eq'd a bit)
This is what I made to give to Victor Krummenacher and Chris Pedersen to learn the bass and drum parts so we could record it on 24 track 2" tape later in the year. We had a few dense rehearsals and then tracked the whole album in a few days, Acoustic Guitar, Bass and Drums.
It's painfully obvious that I had composed everything and memorized it in order to maximize studio time later, I remember doing the overdubs entirely methodically, like "we record mandolin, every song in order. Next, 8va Mandolin, then we record electric guitar, then vocals" etc. I think it was a total of 5 studio days in Aptos, CA. Raw fingers. Then later a few more days mixing at Hyde St in San Francisco. I'm amazed we did it.
This cassette is labeled:
"JES out of his mind, what was he thinking?" 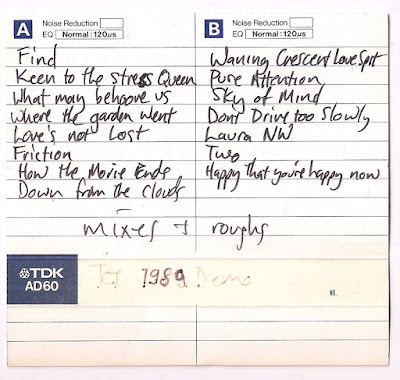 Jes
These are the first post-Storytelling songs, I made these demo tapes in 1989, pre-Hieronymus Firebrain's first 1990 self titled release:

First use of the Roland 626 drum machine! That’s how everybody was making demos at this time.
I’ve left off "What May Behoove Us" and "Waning Crescent Love Spit" as these actual recordings were mixed and used, “Waning Crescent…” on the album and “What May... “ on the first Plane Crash Tape, “Dig Your Own Hardy Mums”

The album was supposed to be called “Five Questions Answered”, i.e. Who, What, How, Where and When, no explanation of WHY—(Who is) Laura NW? What May Behoove Us? How did the Movie End? Where did the Garden Go? When does the sky of mind get too big?

If you know the HF album at all, you can see that it changed a lot when I started working with the musicians, whom I met through David Immergluck (who was initially in our band as well, but then got hired by Camper Van Beethoven to go on tour! Initially the band was called Exalted Birds). David Shamrock and Sean Kennerly came form a band called 501 Spanish Verbs, a Barrington Hall band at UC Berkeley. Tom Yoder I had known for years in Santa Cruz, had played in many ensembles with him. He was also in the Wrestling Worms and later Eskimo!

The album was a disaster, typically. The promised advance never came, the CDs were manufactured in Belgium or Netherlands, they printed the beautiful painting on the cover by Richard Gann in two colors, it looked ill and not in a good way. Julia Hamblin designed it, with the Hieronymus Firebrain font lifted from old Edgar Rice Burroughs paperback jackets. On bandcamp now, you can see that the cover illustration in a photo of the mockup of the cover! (That’s all I had.) This version of the band broke up, I started playing with Russ Blackmar, Ted Ellison and Mark Bartlett, and we went on tour with the Monks of Doom, ostensibly to promote the HF album, but never got copies.
All I ever saw of the CDs was one box of promo versions. Yay music business!

Note several songs did not make it to the actual album, Pure Attention, Two and Happy that You're Happy Now. I can see why, especially lyrically, but "Two" is a kinda cool in a Yes-like way.
credits
released March 10, 2020

played by:
mostly Jonathan, a little bg vocal help from David Immergluck (David was also working as the engineer at the studio, Dancing Dog, at its first location in Berkeley, CA.)