Janine Cooper Ayres and her tour with Let's Active 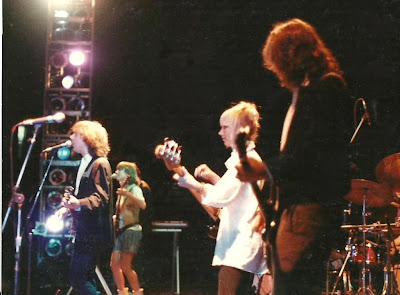 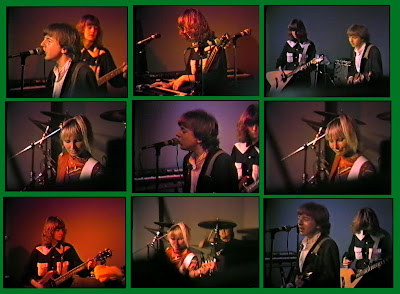 Janine, who's fantastic artwork was the subject of a post earlier this year served as touring bass player in Mitch Easter's legendary Let's Active in the autumn of 1986, both as part of a month long headlining tour and then as support on the REM tour that followed. She has been kind enough to share various memories of those times, as well as some wonderful photographs. Mitch has also chipped in with his own thoughts on the subject of her time with the band....so let's get active here.... 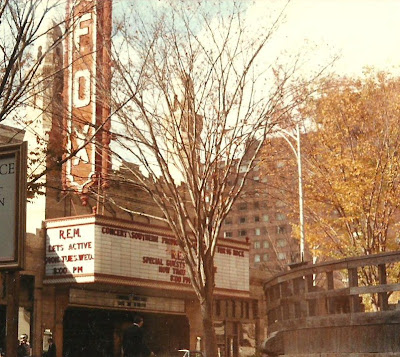 Janine: “I first met Mitch back in '85 when I travelled out to North Carolina from northern California for an audition to play bass. I was immediately surprised to see how ‘down to earth’ he was. He was a genuine, quirky, funny person who was gracious and even a little shy and soft spoken. He welcomed me into his studio and made me feel at home. I took out my cheat sheet and we played several of his amazing songs in a small rehearsal room that was part of Drive In Studios. I didn't get that audition. The gig was given to someone who lived closer and was more available to tour.
So I went back to my day job working at Guitar Player Magazine as their Office Administrator. I was disappointed, but I also felt as though I'd won the jackpot for just having the opportunity to jam with Mitch Easter!!
I moved to L.A. about six months or so later and went to see Let's Active play at a club in Hollywood. It was at that time that I let Mitch know that I was still available and I asked him to keep me in mind for future touring. I think it was a month or so after that that he called me and asked if I could do a tour of several college towns! He sent me more cassettes with more songs to learn and I did my best to memorise them. A few weeks later I was on a plane heading for Winston-Salem. I was 24 years old at the time. It was an incredibly exciting time! After a few days of rehearsing, we packed up and headed out on the road. There were seven of us in one van, another van carried the equipment and there were seven personalities too, all quite different with different moods and opinions, etc. But, we all coexisted fairly well, considering. It was a time before cell phones and texting, which was probably a good thing.
Mitch and Angie both loved to look for deals and bargains (me too), whether they were guitars, cars or vintage clothes. So we made some fun pit stops along the way during our four week tour. They even bought a car at one point. 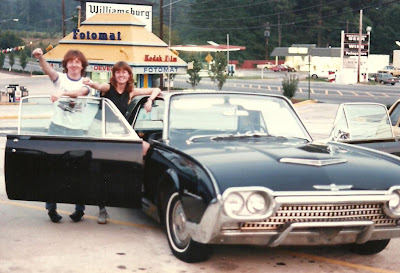 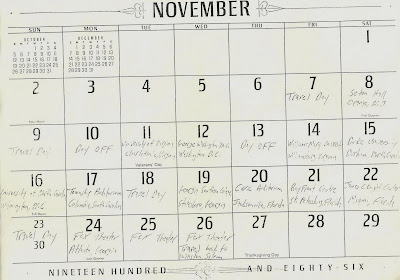 Our very first show was in Collegeville, Minn. Here's an excerpt from my journal. "First show - DISASTER! I knew I was going to make mistakes but this was ridiculous…" I was humbled from that point on!
As the tour continued through Iowa, Missouri, Kentucky and Tennessee I became more familiar with the songs, but still made too many mistakes in my opinion. Sometimes I recovered before Mitch caught on, but other times he would give me a look. I made some pretty bad flubs, especially when I had to re-tune the "E" string down to a "D", but fortunately Mitch was pretty forgiving.
At some point late in that tour Jefferson Holt, R.E.M.'s manager called Mitch and asked if Let's Active could open for R.E.M. during their 1986 Pageantry tour. I was so lucky to be in the right place at the right time. Mitch asked if I could come back out to tour again and I of course said yes.
Soon we were on the road for a month in support of R.E.M. and the release of their 1986 album, "Life’s Rich Pageant".
Our first show was at the University of Virginia. In my journal I wrote: "First show went very well. My bass sounded great! I wasn’t as nervous as I thought I’d be. Played to crowd of about 5,000 people."
The following night we played in Washington D.C. and I wrote: "Another good show. Sound was fine. Pete Buck and Mike Mills came up on stage for ‘Hush’ during our encore!!!" 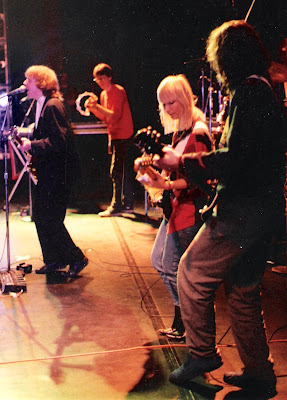 A few nights later we played in Williamsburg, Virginia.
"Good show! Positive response from crowd. Buck and Mills came up for ‘Back of a Car’. Played to 11,000 people". I had never played in front of an audience that size before. It was outrageous!
The guys from R.E.M. were so incredibly kind to us. In fact, as we continued down south a bunch of us stayed at Peter Buck’s house in Athens one night. He gave everybody a bed or a couch to sleep on in his large old beautiful house. You hear about ‘southern hospitality’, and I can tell you it’s for real.
We continued to Jacksonville, Orlando and then Miami before finishing our tour in Atlanta Georgia at the Fox Theater. It was sad to see it end. I wish I could say that the whole experience of touring with Let’s Active and R.E.M. was pure fun, but it wasn’t. At times it was frightening! Other times, stressful! I was sort of thrown into a scenario of performing with some amazingly talented people and I didn’t always feel worthy! I enjoyed playing with Eric Marshall and Angie Carlson but it was Mitch who impressed me the most. From his singing and songwriting accomplishments to performing, composing and producing and arranging in the studio he's done for so many other bands. He’s never received the recognition he deserves, but I think some day he will. In my opinion, he’s one of the most talented artists out there. He's also one of my favourite humans, and the tour with R.E.M. is one of my favourite memories. I was very lucky to have had the opportunity to tour with him and his band back in 1986. It was one of the highlights of my musical career, for sure! Why didn't I stay on with Let's Active after that tour? I think that part of the reason was that I was engaged to be married. If only I had known then that my fiancée was not of sound mind and body, I may very well have asked Mitch if I could stay in North Carolina! We never did get married.”


Mitch: “The R.E.M. tour in '86 was the last one we did with them, but it was fun, as always. They are such a classy bunch, including every single crew member, and of course we were treated royally and got to play some very groovy venues, like the famous Fox Theater in Atlanta, as well as a few, for us, mega places. When I think of this tour, of course I think of the fabulous Janine Cooper! I wish she'd been in the band the whole time, well, assuming she wasn't bored to tears, because she was a delightful person! I really loved her, and mind you I say this to indicate my high regard for her. As opposed to the impressive effect she had on a good portion of the R.E.M. operation... when I picture a typical situation of Janine arriving for soundcheck or whatever, I see at least 5 or 6 R.E.M. guys going into full-on Tex Avery "wolf" mode, you know, eyeballs falling out on springs, tongues crashing to the floor etc. Oh my! She was really expert at dealing with the poor boys with kindness and good cheer, but I can also imagine how she might've actually been frightened by so much sheer, er, enthusiasm. She really Had the Power! Well, she is very pretty and combined with her sunny demeanour it certainly is a winning combination.

She was a talented player with these sort of excellent "traditional values" as a musician, by which I mean she had a very sensible Fender Precision Bass, and she was aware of the Heritage involved in being a proper rock bassist. She had worked at the offices of Guitar Player Magazine, so doubtless she also got a constant dose of Guitar Dude input as well. Anyway, she dutifully learned my ridiculous busy bass parts, the likes of which I think may have been somewhat different from the sort thing she'd done before. Really, I think if we had been able to keep playing with her we might've been able to regain some of our dwindling appeal- she probably was the most "right" person we could've had on bass, post-Faye. I'm not 1000% sure why we didn't continue with her, actually. The later LA with Angie and Eric was a different animal from the original band and no doubt there was some idea of having people who all lived close by, so we could easily rehearse, etc. but I have to say that I still really, really regret not going to more effort to keep doing something with Janine. Ack, I'm making myself really sad here! Well, I see some reminders every day, I have a painting of hers and some of those notable refrigerator magnets she made of Jesus greeting the Space Aliens, etc. Ha!”
/jandm.jpeg"> 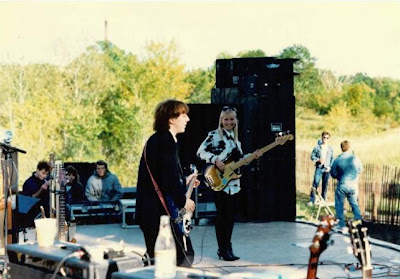 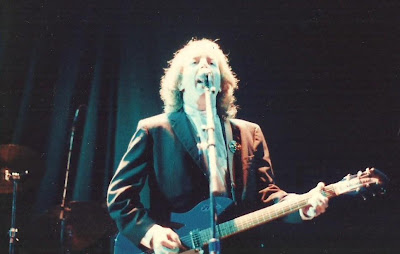 Thanks to both Janine and Mitch for their insights.

Labels: Janine Cooper Ayres and her tour with Let's Active

Great blog. Well written, very touching and a nice snapshot of a fun, innocent time in rock and roll.
Enjoyed it!

Awesome!! Those were the days!!!