For the last couple of years or so Wayne Moss has been performing most Sunday evenings at the Piccadilly Cafe in Madison, just down the road from his Cinderella Sound Studios. Each week he invites various guest musicians to play along and in the past he's had various Barefoot Jerry/Area Code friends such as Weldon Myrick and Charlie McCoy drop in. But then a couple of weeks ago this message turned up on his facebook page.
"This Sunday, Buzz Cason will be the special guest at Pickin' @ the Dilly, in the back room of the Madison Piccadilly. Mac Gayden is coming to pick with Buzz and Wayne. Come out and join us from 5-7PM. Hope to see you there!"
. 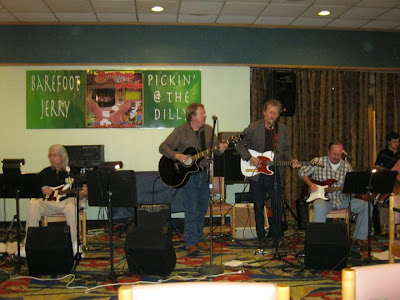 On stage Wayne, Buzz and Mac
So just like that the historical reunion of the two remaining original members of the legendary Barefoot Jerry on stage for the first time in who knows how many years. I wish I had been there. And let's not forget Buzz Cason who's own involvement in Wayne's long and illustrious career is documented in my early post here:
http://artintodust.blogspot.com/2010/06/barefoot-jerry-history-and-critical.html
. 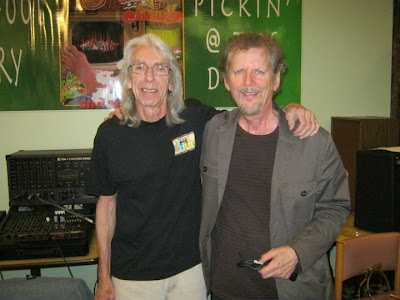 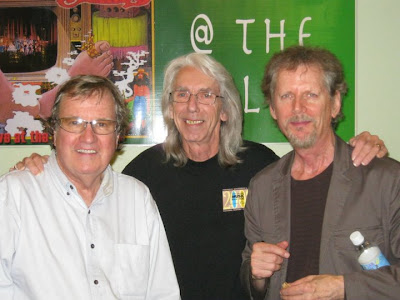 Buzz Wayne and Mac
Well being in London rather than Nashville I could not be there that evening but seeing the pictures from that legendary evening that Wayne posted on his facebook page
http://www.facebook.com/#!/waynemossguitar came with a most thrilling and unexpected surprise for myself. There on the wall behind them was a banner and smack dead centre of it was a piece of artwork that I recognised. A few years back I sent for the Barefoot Jerry Live At The Exit Inn CD from Wayne, (if you have not yet purchased this wonderful album yet then I suggest you do so right away). I sent him a thanks email at the time and just for the fun of it I put together my version of a front cover for it, a collarge taken from various Jerry album covers, because i thought the actual cover used was a bit boring and generic to be honest. Like i said i did it for a bit of fun. Well now all these years later and there it is in all it's glory on the banner behind Wayne and Mac. I felt suitably chuffed to bits. Wayne probably didn't recall just who he got the art from so i dropped a comment on his page saying how honoured and surprised I was. Wayne kindly replied.
. 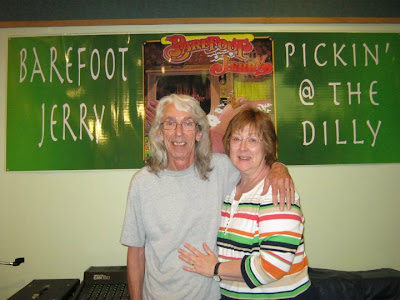 Wayne and Connie Moss
Mick,
we will go over this afternoon and get a good shot of the banner and send it to you. We had a good time when Mac came to the Dilly a couple of weeks back. He came along with Buzz Cason. Buzz is the one who hired me to work with The Casuals all those many years ago.
Pickin'@theDilly is a gig I've had for going on 3 years now. It's in the back room (banquet room) of the Piccadilly Cafeteria, in Madison Square Shopping Center, here in Madison. We play for 2 hours every Sunday evening from 5-7PM. We have a drummer, guitar player and me every week. Each Sunday, we have a different guest or guests, playing a variety of music. We always start with some gospel tunes. Then we move on to a combination of Barefoot Jerry and Area Code 615 songs, special guest's songs, original songs and whatever we feel like playing. With the nuclear plants in Japan in trouble, we will no doubt play Hiroshima Hole this Sunday. The guests range from members of the Country Music Hall of Fame, to lesser known, talented professional musicians. It's always a lot of fun and is always different each week. The banner stays up 24/7. We have had lots of comments and compliments on your art work. The banner is 9 feet long and 3 feet tall.
Best,
Wayne
. 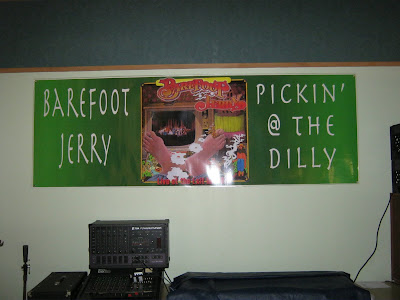 Photo by Connie Upshaw Moss
And here it is. Oh yes indeed.
Posted by jay strange at 16:51