Wanderlust and others like Weird Summer, Daryl-Ann and The Idlewilds are bucking the trend of current bands by creating rather than digging through pop history providing great new songs each played by a unique grouping of musicians sounding like nobody but themselves. Wanderlust's debut album "Prize" was one of 'the' albums of last year. Eleven perfect songs from lead vocalist Scot Sax served up in a strong soulful voice and backed by a band full of power and beauty. Like the similarly brilliant Daryll-Ann, Wanderlust go for the 'play live in the studio and then add production' style of recording. The songs are darkly romantic, the twin guitars of Sax and Rob Bonfiglio rage like a storm over a rhythm section of Mark Levin, bass and Jim Cavanaugh, drums, brimming with drive and subtlety. Music to stir the emotions and to leap up and down to,all that and great songs too. What more could one ask for? Well how about a second album? Your ever vigilant Bucketeers caught up with Wanderlust main man Scot Sax, Stateside just as preparations were being finalised for that much anticipated new arrival. But I wonder how did he first get into music?

Scott: My brother's stereo, listening to Bowie, Queen and of course, the Beatles. I was thirteen years old when I decided I had already mastered the drums. I figured: 4/4 beat, got it. Next!? I then switched to guitar and made up songs pretty early on. It wasn't hard to notice that in the posters the singer was very big and clear while the drummer was a blurry smudge in the background. Although, I've always secretly enjoyed drumming more than guitar playing. I guess my ego got the best of me.

What were the earliest bands you were in?

While still behind a kit, my first band played one song and one song only: "Free Bird". Eventually, we broke up because of artistic differences! I played guitar and sang in my second band. We played all my songs. I figured we'd be famous any day now. I was 14.

How did Wanderlust come about?
After years of frustration - keeping bands together, money (or the lack of it), and the extremely bad taste of Americans in the late 80's - I had a revelation. If nothing ever comes of this rock dream, why not have fun at least. Loud, bashing, crashing, joyful, serious fun! Rob, Mark, Jim and myself found each other through playing and answering ads in the local musicians grapevine. Jim and I actually played off-and-on for a few years, but rediscovered each other on a whole new vibe when we found Mark and Rob. As this was something new and exciting, we named ourselves 'Wanderlust'. 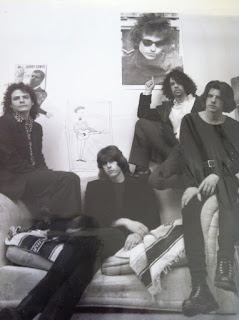 Tell us about the making of the first album.
In October of '94, two years after our incarnation, we met Michael Musmano by chance, while on a photo shoot (even though nobody was banging our door down for pictures!). We stumbled upon a beautiful house on Pine Street in Philadelphia. I knocked on the door to ask for permission to pose on their steps, not having the faintest idea that the home owner also owned a recording studio packed with vintage gear (some of it from the Abbey Road Studios)! Anyway, to cut to the chase, we found ourselves in his studio two weeks later with his house engineer/producer, 24 year old Michael Musmano. The plan: cut four songs in three days, press and release locally.

Before we got the CDs from the pressing plant, RCA offered us a deal (two weeks after the session). The album was finished at the end of December. We used the original versions, rough mixes and all, of the 4 song session: "I Walked" (which became the first single in the US), "Troubled Man"(my favourite), "Stage Name" and "Sundial"(my second favourite). In fact "Sundial" ends abruptly because we only had one reel of tape on that session, and it ran out while we were still playing. There is one out-take from "Prize"; It's a song called "Smile" which may show up on a Yellow Pills compilation in the near future.

The most striking thing about the album is the sheer quality of the songs.
The best songs are usually written when you're not writing a song at all. Sometimes I'm listening to someone talk and they say something that sets me off in a musical way and I seem to be paying attention to what they're saying, but in actuality, I've just made a chorus out of words they said five minutes ago, or maybe, I'm working at a song and stop and forget about it and while I'm forgetting about it, I'm actually subconsciously writing a better one. I guess the key to song writing is going from inspiration to mixing the damn thing before you get any stupid ideas. In other words, cut out the middleman. Write it, cut it, go to sleep. And, if there's nothing remotely funny about the song, it probably sucks. Well that's my theory anyway.

What is the band like live?
Since we do very little overdubbing in the studio, we are able to perform the songs live without much trickery. We are very often told that our live show is much more bombastic than the record. Of course, that only makes sense since we're playing through speakers that are a zillion times louder than a stereo! But honestly, we didn't really want to make a record that would annoy anyone sonically after a week or two. I find that some of the most classic rock records are actually toned down by today's standards, like "Ziggy Stardust" and "Physical Graffiti". I call these bedroom records. The kind you return to throughout your life because not only do you dig the songs, but it sounds good too. My dream is to make a bedroom record

So what's next?
We have just completed what will be our second album for RCA. It should be released early '97. Hopefully this one will be officially released in Europe. Since almost all our influences are British, it would only be fitting to send it your way! Right?

What other music are you into?
I love Lindsey Buckingham, Bob Dylan, Ween, Paul McCartney, the Kinks, and I like a lot of the things that are out now, though I can only think of "1979" and "Tonight"!. I guess that means I like Smashing Pumpkins too. It's just so hard to indulge in new albums the way one does in, say, "All Things Must Pass" or Dylan's "New Morning" or "Ram". But, I swear, I'm trying, I am trying!

So there you go. The new album might be called Swirl. Those of you already wise enough to possess " Prize" will run to your favourite emporium when the time is ripe anyway and those of you without the first album should track it down immediately. Then you too will let nothing stand in the way of acquiring more Wanderlust. It's as simple as that. Now go and make yourself a cup of tea and slap on your favourite bedroom record.
With thanks to Scot Sax
From Bucketfull of Brains 47 Winter 1996

Update. So typically RCA dropped the band and shelved the superb second album and Wanderlust were no more. Scot Sax went on to form Bachelor Number One and then Feel also releasing some fine solo albums. Not Lame also released an eight track collection of rare stuff and then a two cd collection containing the unreleased second album and even more rare stuff....both essential releases are available from Not Lame


Rob Bonfiglio went on to form the excellent Skies Of America

http://www.myspace.com/robbonfigliomusic
Posted by jay strange at 08:57